On the 27th of January 2011 we introduced Pocket Casts to the world. Being huge podcast fans ourselves our aim was to build the best possible app to listen to them. Our goals back then were simple: insanely fast refresh speeds, push notifications for new episodes, offline downloads and a streamlined player that let you do things like quickly skip over boring parts. Fast forward 5 years and here we are at version 6. Our basic goals remain the same, we’ve just become more ambitious over time and added more features to our must haves. Cross device syncing. Variable speed playback. Episode filtering. Tablet support. Podcast chapter support. Silence Removal. We also added an Android version, a web version and so much more.

But back to the iOS version. It was the original incarnation of Pocket Casts and it’s served us well over the years. That said, it was built in a time when the iPhone 3GS and the iPhone 4 were the devices of choice. When a lot of the modern frameworks and languages that Apple provide to developers weren’t available. This led us to an interesting question: how much longer do we see Pocket Casts being a product we support and maintain on iOS? The answer was a simple “for a long time to come, since we all use it and love it”. This meant we had to make some hard decisions. If this was going to be a platform we could build on for the future it would have to be modernised, and parts of it completely re-written. So in mid-2015 that’s what we set out to do. To bring our iOS version into the modern era both at a technological and a feature level. All the things we’ve done since then could fill many more blog posts, but allow us to give you some of the highlights:

Swifter than Swift
The majority of the app has been re-written in Apple’s modern programming language, Swift. This gives us amazing performance and stability improvements over the old code base. Re-writing most of the app also allowed us to rethink decisions we made over 5 years ago with the knowledge that we’ve gained since then. Long story short the entire app is now faster, more reliable and built for quick iterations and future updates.

We’ve always been proud of the Pocket Casts User Interface. It’s simple to understand, easy to use and it doesn’t hurt that it looks good as well. Instead of throwing that all out and starting again we’ve refined every part of it. Many things can now be accomplished faster than before and it just looks and works so much better.

Trim Silence And Volume Boost
First pioneered by RSS Radio, we’ve heard from a lot of our users that they really wanted a way to make voices sound louder and to remove silences in conversations. Version 6 of Pocket Casts for iOS brings both of these features. We’ve been refining this algorithm for well over a year now to get it just right and we’re so excited to finally share it with you.

iPad
Ever since adding iPad support to our app we’ve been watching closely to make sure it’s always a first class citizen on that platform. This release is no exception, it brings both Picture in Picture and Multitasking (split screen) support. So whether you want to watch a video podcast while using something else on your iPad or browsing our Discover section while also surfing the web, we have you covered.

Up Next
We originally added Up Next as an easy way to see and decide on what to play next. The idea was simple: you’d start a podcast, then pick one or two to follow it. It’s always felt like a far simpler approach than most other apps that make you manage lists, priorities and so many other confusing features. This release we make it even easier, just swipe the mini player over in any episode filter, and add episodes to up next with a simple tap. Long press to re-arrange or remove episodes straight from the mini player as well. Finally the addition of an option to automatically add downloaded episodes to Up Next is yet another way to make sure there’s always a few things queued up for you ready to go. You can see a quick video demo of the feature here. 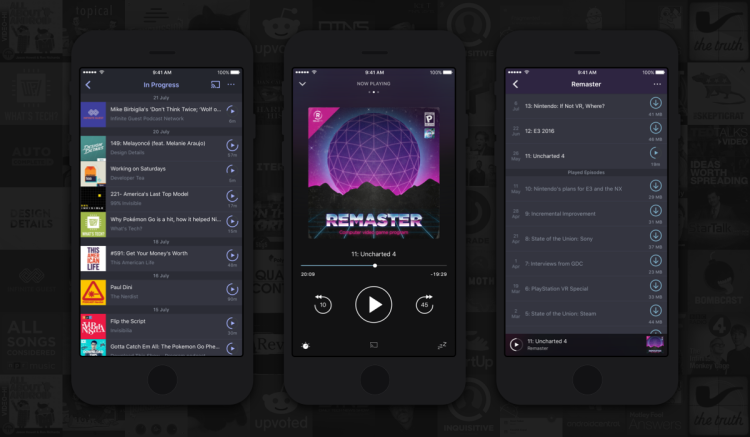 We know a lot of you love to listen to podcasts at night, and that a lot of you are sensitive to bright, vivid whites scarring your retinas for life. Well the new Dark Theme is definitely for you. At a touch of a button the entire app turns dark and wonderfully pastel.

And Much Much More
The features in version 6 are far deeper than what we’ve outlined above. There’s improvements to auto download, including a new waiting for WiFi state. There’s 3D Touch shortcuts for those of you with fancy new phones. There’s MP3 chapter support (including images) for all your favourite podcasts that are starting to support those. There’s a new filter option which lets you see only episodes that have come out in the last 24 hours, or a different time of your choosing. A new dedicated download area lets you see all your downloaded podcasts in the order you downloaded them and gives you options to quickly clean these up as well. A new stats area gives you insight into how long you’ve spent listening to podcasts and just how much time various features of our app have saved you in doing so. There’s a brand new Discover section to make finding new podcasts even more enjoyable and quicker than ever. In short there are a lot of things to explore and enjoy in our new hand crafted update.

That’s a quick summary of what’s new in this update. We look forward to many more years of updates. Our plan is to make these far smaller and more incremental going forward. We’ve heard your feedback loud and clear that it would have been nicer to get the feature list above in a steady stream of incremental updates instead of a yearly ‘big bang’ style release. This time around because of the sheer amount of things that had to change this wasn’t possible, but part of this redesign was to make sure that in the future it is. So while we work on version 6.1 and 6.2, please take the time to enjoy 6.0 and let us know what you think. We’re excited about being able to finally share it with you and we’re also excited for all the great feedback you’ll continue to give us going forward.

So what are you waiting for? Grab the update or if you’re new to Pocket Casts come join us as our journey continues!