Here at Pocket Casts we’re a tiny team that’s passionate about all things podcasting. We want to be able to listen everywhere we go no matter what we’re doing. That’s why our app is available in your pocket on iOS and Android. It’s also available in your car through CarPlay and Android Auto (as well as standard Bluetooth integration). It’s on your TV through AirPlay and Google Cast. It’s even available on your Sonos speakers. You get the idea, we want to enable a seamless playback experience of podcasts everywhere.

Today we’d like to talk about the Web version of our app. Originally we built it as a small satellite service to see if our customers wanted podcasts on their computers as well. It turns out they did, and in far bigger ways than we ever anticipated. This forced us to rethink the original approach we had a for a really simple web version that took a back seat to the mobile apps. It was clear that for a lot of people, this was their primary listening platform for their podcasts. Long story short we took that to heart, and we’ve been hard at work for a while now on a massive update to web version. Today we’re excited to share some details about that with you, and also invite you to help us beta test it.

This new version is a ground up re-write of the old one, to enable us to do some really ambitious things going forward. This was a huge undertaking, but even in this initial beta version we have some exciting new features for you to try out: 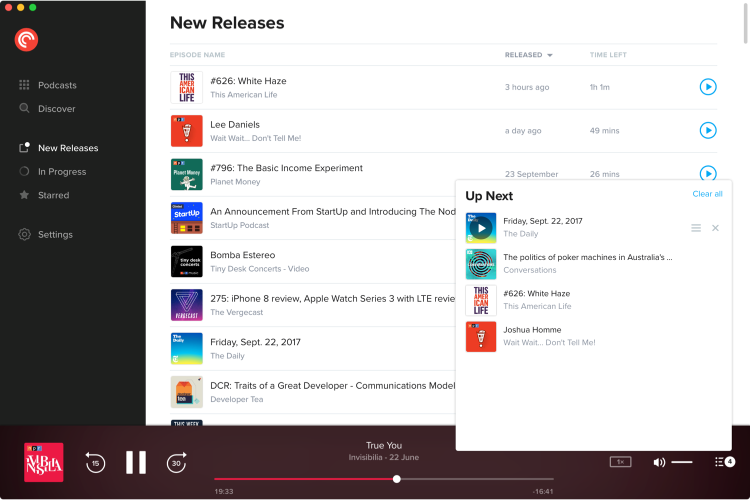 There’s a lot more in this version of the web app, and it has support for some features we’re not ready to announce yet as well. We’ll have more to say on those later this year, but in the meantime if you want to help us test it, here’s the details:

In terms of a release date, we’re very much taking the approach of “we’ll ship it when it’s done”. We’re not trying to rush out something that’s not finished yet and this release is still very much a work in progress. We value and want your feedback though, so if you’re keen to join us, please do!  If you want to be notified about when that is and keep up with other Pocket Casts news, you can sign up to our mailing list.