Posts from the ‘Pocket Casts’ Category

The long wait is finally over, today we bring you Pocket Casts 4 for Android, a free update to all our Google Play customers. We can’t tell you how happy it makes us to finally release this version to you all. It’s been at least 6 months in the making, thousands of hours worth of blood, sweat and occasionally even tears. So let’s talk a bit about what’s new.

Syncing and Backup
This has to be the biggest and best feature of version 4 by far. Basically you can (optionally of course) set up an account and store all your podcast subscriptions, playlists & playback progress in the cloud. What this enables you to do is seamlessly sync your progress with your other android devices, and as we update Pocket Casts on iOS and other places you’ll be able to sync to those as well. Even better is that this makes moving to a new device, flashing a new ROM or just starting fresh super easy. Just log back in and Pocket Casts will set you up exactly where you left off, including hooking up any downloaded files you might have on your phone/SD Card from before as well. During development I’d estimate between us we uninstalled/reinstalled the app about 100 times, and this feature worked flawlessly!

Powerful smart playlists
Another amazing feature of version 4 is being able to easily build lists of the kind of episodes you want to listen to or download. You can filter by an episodes playing status, whether it’s audio or video, whether it’s from a particular podcast, its download status and whether you’ve starred it or not. This lets you easily build a playlist of what you want to listen to which you can then sort how you like, and also choose to have the phone auto-download for you. It’s a game changer and I personally can’t go back to the old version because of this feature alone.

Built in variable speed playback
I can’t tell you how painful this was to build (hands up if you love native C++ code?), but the end resulting is amazing. No more expensive, crashy plugins to download to get variable speed playback in Pocket Casts. We’re the first podcasting app on Android to do this, and the difference it makes is huge. You can go all the way from 0.5x to 3.0x. My personal favourite is setting it to 0.5x, aka ‘Drunk Mode’ and listening to your favourite podcast host slur through all their words.

Stunning phone and tablet interface
We heard you loud and clear. Our previous iteration was a messy port of an iOS app built for Android 2.2. Times have changed, and so has our stunning new Holo style interface that works seamlessly on both phones and tablets.

Absolute control
Control your podcasts from the Notification Center, lock screen, headphones, bluetooth, etc. Basically your favourite app is only ever a tap or two away.

There are of course, many more features large and small, but for those you should really just go and grab the app, or find out more on our website! Happy podcasting to you all, from the team here at Shifty Jelly!

A few people were bemused by our decision to release Pocket Casts 4 first on Android. I suspect a few of them even think we may have lost our marbles. I thought I’d take a few minutes to outline exactly why we did what we did.

Team Size
We’re a small team of only 2 developers and a designer. We realised late last year as we were working on a simultaneous release of Android and iOS that if we were going to have any hope of shipping either of them, we’d really have to choose one to do first. The take-away from this is simple: if we were bigger (say double our current size) we would have just done both.

Historic Sales
Pocket Casts on Android has outsold the iOS version historically at about 5:1. That means for every 1 iOS version we’ve sold, 5 were sold on Android. The Android version also costs $1 more, so we’re making more per transaction as well. The reasons for this are a blog post on their own, but it’s a fact.

Future Sales
On Android there is no native podcasting solution, and we see a massive potential to fill that space. There are other apps out there, but we feel we have what it takes to become the dominant podcasting app on that platform.

Why Not?
Team rivalries should be left on a sports field. There’s no reason not to launch on Android first or iOS first in 2013. Both are massively viable platforms full of users who want to pay for great apps. Anyone who tells you otherwise is wrong. The choice of platform all comes down to where your users are, and which one makes more sense for the kind of app you’re launching. It’s no longer a clear-cut ‘always iOS first’ world.

App Quality
Let’s be honest, 2 years ago Android really sucked. The OS was a mess, the store was a mess, the SDK was a mess and the hardware was a mess. Today all that has changed, and it’s an amazing platform. That said overall the app quality on iOS is still far higher than Android, as developers catch up with all these new changes. There’s a point coming soon when Android will be full of high-quality apps, but there’s a gap in the market right now for small developers like us who are passionate about design to create something a cut above the rest. In short it’s currently easier for a good app to stand out on Android than it is on iOS.

So there you go, a short and sweet explanation of why we did what we did. Once version 4.0 is out on Android (countdown available here), we’ll be working on the iOS one next. We won’t be starting from scratch since a few months of development has already gone into that version, but there’s still a lot to be done. If you’re fascinated by the Android vs iOS development process, there’s a great interview with me available here.

For the past six months we’ve been working on something really big and, judging by the constant emails and tweets we get, it’s no secret what that something is. Today we’d like to talk a little about the upcoming release of Pocket Casts 4, on Android.

So what’s new in Pocket Casts 4?

We’re going to be shipping it on Wednesday the 27th of February and it will be a free update if you own version 3 on Google Play.

Version 4 for iOS will be out later this year (Hey! We’re a team of just three people. Give us a break!), and yes you’ll be able to sync between iOS and Android, finally bringing peace to the OS wars!

We think its the most powerful and beautiful way to listen to podcasts on any platform. We know you’ll love it and we can’t wait to get it into your hands.

Today Apple released their own podcasting application for iOS. This was widely rumoured, though it still seems to have taken a lot of people by surprise. Naturally a lot of people have asked us about how we feel about being ‘sherlocked’ (a fun term dating back to an app called ‘Watson’ which Apple copied, and bundled into Max OS X as ‘Sherlock’). Our reaction to the rumours was of course trepidation and fear, since Apple can play ‘dirty’ and do all sorts of things with iOS apps that we as third-party developers are not allowed to do. The app that they released today though, made us very happy.

Apple’s app is quite pretty to look at, and it does a nice job of separating podcasts out of iTunes so in that sense they’ve done the podcasting community a great service. Once you play with their app for more than 5 minutes though, you realise it’s little more than that. It’s literally the features they once had inside the Music and iTunes applications bundled into iOS, moved into their own application. As the maker of a podcasting app, we realise this sounds dis-ingenious, so please, allow us to elaborate.

Let’s pretend that I’m a podcast fan (which I am, so that part is easy) and I’m out to find a podcasting application. Logically (for me at least) I’d try the free Apple one first. Here are some of the things that are immediately annoying about it: 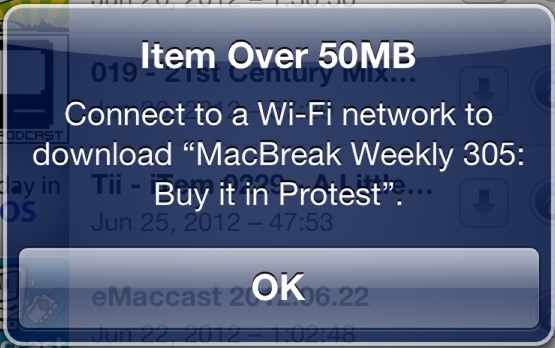 No downloads for you

Where am I up to? How long is this podcast?

Now I know what you’re thinking. “You’re purposely focussing on all the things you’re app does well, because you want to point out how great it is. That’s not fair”. You’re right, and you’re wrong. We built our app because we’re avid podcasts fans. We spent a long time agonising over all the little details that we wanted in an application to make our podcast experience pleasurable, rather than painful. So yes, the Apple app is missing things our app has, and yes I’ve pointed out some of them, but for good reason: these are all features we wanted, nay, demanded.

So why would you buy our app over the Apple one? Do you even need to? If you’re a person who listens to only a few podcasts every now and again, you can probably get by with the Apple app just fine. It’s very capable, it’s nicely designed, it’s clean, it’s minimal. But if you want more, here’s the things you’d get with our app:

I could literally go on all day, but here’s a few more of my favourite features of our app:

When we started building Pocket Casts well over 2 years ago, we were very confident that Apple would make their own app one day. We were also very confident that they would keep it clean, minimal and give it a feature set that would only appeal to casual podcast listeners. In our eyes that’s exactly what they released today, it’s a great application but it’s really not what we as podcast fans wanted. We made many design and implementation decisions (like server-side podcasting parsing) in the early days for this very reason, to stand out head and shoulders above what Apple would release.
So to the question “Are you worried that Apple has killed off your app” we honestly answer: “Not really, if anything we hope this drives more people to using podcasts exclusively from their phone, and then once they get frustrated prompts them to look around for better applications”. Only time will tell, but today alone our sales are 2x higher than this time last week, so it could well be that a rising tide lifts all boats. If you’re serious about podcasting, I’d take our app over Apple’s any day of the week…but why take our word for it, grab the free version or the paid one and try it out for yourself.
18
Nov

The 3.2 update for iOS is out, go grab it. Highlights include: